Groupe ISCAE has organized, on March 15th, 2018 at Casablanca campus, a conference-debate under the theme: “The development of China and the sixtieth anniversary of the Sino-Moroccan relationship”, moderated by His Excellency Mr. LI Li, Ambassador of the People’s Republic of China in Morocco.

Your Excellency the Ambassador of the People’s Republic of China, Ladies and Gentlemen of the Chinese Delegation, Directors, Professors, Dear Students, Honoured Guests,

Hello and welcome to the conference “The development of China and the sixtieth anniversary of the Sino-Moroccan relationship”, led by His Excellency M. LI Li, Ambassador of the People’s Republic of China, whom I Thank warmly for the time and energy he dedicates to our School.

He began his career in 1988 as an official, attached to the Department of African Affairs of the Ministry of Foreign Affairs (MAE) of the People’s Republic of China. Then he was Attaché, Third Secretary at the Chinese Embassy in Mali, then at the Department of Western European Affairs of theMinistry of Foreign Affairsthen in France. After that, he was appointed second secretary, deputy division head of the committee responsible for the work of internal organization of the party at the MFA, and then first secretary at the general direction of the Ministry of Foreign Affairs. In 2001, he was appointed deputy Consul General of China in Marseille, and after many diplomatic positions, he was Ambassador Extraordinary and Plenipotentiary to the Republic of Mauritius and since 2017 to the Kingdom of Morocco.

Since 1978, and following many economic reforms and social changes, China has constantly transformed itself to become a major player in globalization. Indeed, it was both an economic transition towards a market economy, and a policy of openness to the world in order to attract the capital and technologies necessary for its development.

In fact, these forty years of unprecedented reforms and growth have allowed China to prevail on the world stage through a conversion of its economic weight into political weight, by activating its economic diplomacy to consolidate its position and face current and future challenges.

As a matter of fact,diplomatic relations with Morocco began in 1958, proof that China and Morocco have, been aware, sixty years ago, of the geopolitical interest of developing their cooperation. Today, both parties confirm their commitment to strengthen their strategic partnership, particularly in the automotive, infrastructure and tourism industries. The signing of an agreement between our two countries for a joint construction of “the Belt and the Road” makes it possible to consider new areas for the development of Sino-Moroccan relations in the coming years; without neglecting the tripartite cooperation that positions Morocco as investment hub for Africa.

What has been the evolution of this relationship between China and Morocco? What were the assets and benefits of both parties? What are the opportunities for Morocco through the new Silk Road?

Coming back to higher education, management specifically, we know that Chinese Business Schools have experienced a remarkable evolution byjoining the global network of schools triple accredited. Cities like Changhai and Beijing have become popular student destinations that attract our ISCAEistes.

Reciprocally, but to a lesser extent, we are welcoming more and more Chinese students, through 4 active partnerships, especially since we have duplicated / launched a large part of our English courses as part of the “EnglishPath ” practice.We believe that the development of partnerships between Moroccan and Chinese schools and universities will make a significant contribution to strengthening future relations between the two countries. Indeed, the interaction between students, and working in multicultural teams is strengthening understanding and mutual enrichment and have an impact on the destiny of people and humanity.

On this word of hope for an even more fruitful cooperation and a better future for our two countries, I yield the podium to His Excellency Mr LI Li, Ambassador of the Republic of China to Morocco. I thank Pr Tarik El Malki, Director of Development, International Relations and Research for this initiative and for all the efforts made to contribute to the influence of our Institute through conferences and round tables on interesting topics such today’s. I also thank the management team of ISCAE-Casablanca for support and communication as well as the students andprofessors who got involved to make this event happen. 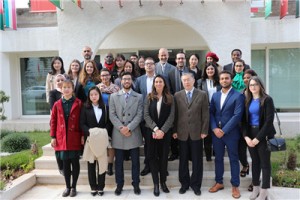 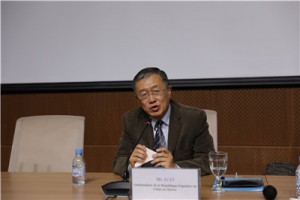 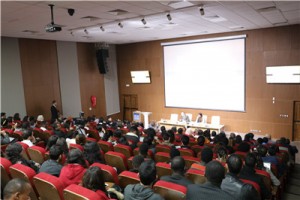